Royal jelly has been used as a nutritional supplement and therapeutic cure since ancient Egypt and Aristotle’s Greece. Royal jelly supplementation, whether eaten or applied to the skin, may improve the immune system, lessen premenstrual symptoms, aid in the treatment of diabetes, and reduce the negative effects of chemotherapy. Here is all you need to know about the properties of Royal jelly.

What is Royal Jelly?

Royal jelly is a milky fluid generated by honey bees and given to their growing larvae. All larvae are fed royal jelly by nurse bees, which acts as the major indication for a larva to grow into a queen. Royal jelly, like honey, may be obtained by beekeepers from honey bee colonies developed in special queen-making beehives. Below is the benefits of Royal Jelly.

As a result of cancer treatment and a weakened immune response, chemotherapy patients may develop painful sores and ulcers in their mouths (called oral mucositis). Royal jelly supplements (1 g daily) reduced oral sores and decreased healing time in a trial of 103 cancer patients. Royal jelly was swished in the mouth before being consumed. Despite encouraging results, a single clinical trial is inadequate to justify the use of royal jelly as an adjuvant to chemotherapy unless further clinical trials are completed.

Rheumatoid arthritis is an autoimmune illness in which the immune system assaults the body’s own tissues, particularly the joint lining. Royalisin from royal jelly was found to prevent inflammation and damage in rheumatoid joint tissue in a cell investigation.

Royal jelly, like honey, may be good to the immune system. In a mouse research, individuals administered royal jelly had greater antibody levels and quicker immune system cell proliferation. Below is the most popular Royal gels from users’ point of view.

The most popular Royal gels from users’ point of view

YS Royal Jelly/Honey Bee  One to two teaspoons twice a day, preferably on an empty stomach between meals, with a little quantity of water. 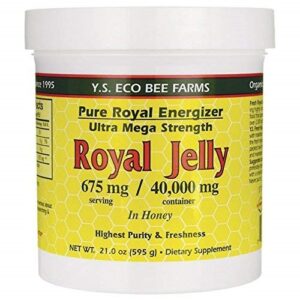 YS Organic Bee Farms  Place the container in warm water and whisk to soften. Repeat as necessary to achieve spreadable softness and reap the full benefits. 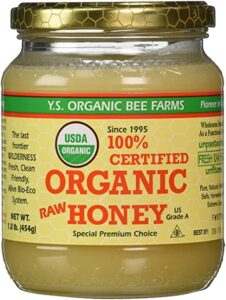 NOW Supplements, Royal Jelly 1000 mg  Royal jelly is a natural honeybee product used to feed immature and adult queen bees. The nutritional composition of royal jelly is complex, with nucleotides, polyphenols, and unique organic acids. Since ancient times, it has been utilised as a health tonic. This royal jelly has been freeze-dried for optimal stability and is one of the best items on the market.

One of the active, quantifiable components of royal jelly is 10-HDA (hydroxy-d-decenoic acid). This product may exhibit natural colour variation. The presence of naturally occuring particles in royal jelly is possible. Take 1 softgel 1–2 times per day.

Ginseng & Royal Jelly Extract 10CC Imperial Elixir Suggested Application As a nutritional supplement, consume 1 or 2 bottles as a beverage daily. Contains less than 0.5 percent alcohol – Or as prescribed by your healthcare provider. 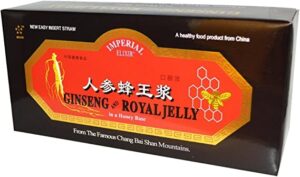